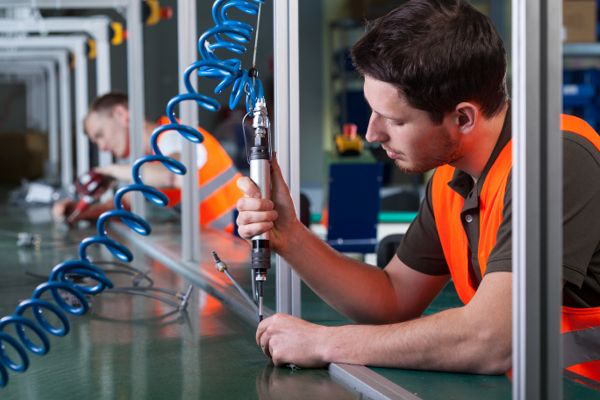 Compressed air is widely used in manufacturing plants across the United States. And, if your company relies on it, you’ll know that it’s as vital as electricity to ensure the continued running of your operations.

For example, in an electronics manufacturing facility compressed air is used to power automatic assembly equipment and continuous air flow is critical to maintain production. Without reliable air delivery, manufacturing will cease and the resultant downtime could lead to tens of thousands of dollars in lost revenue.

Given the “lifeblood” status of compressed air it is interesting to note that maintenance and monitoring of the system as a whole is, for the most part, overlooked.

The servicing that does occur is usually focused on the hardware in the compressor room, which does need attention but is only a part of the overall system.

Most problems occur in the piping distribution system. Typical issues are things like rust, leaks or incorrect pipe size and are typically straightforward to fix but without the monitoring of this piping, troubleshooting can be time-consuming and expensive.

For full visibility of the entire compressed air system, sensors must be deployed in key locations inside your facility. These sensors should measure pressure, vibration, flow, temperature, humidity and power.

The cost of lost pressure

Around 2psi of air pressure equals 1% of a compressed air systems total energy cost. This means a system with less than optimum air pressure is wasting energy and wasting money.

Pressure loss is commonly caused by:

Just one of these can result in your compressor working far harder than it should and will contribute to shortening the working life of the unit.

Operational oversight also prevents time and money being wasted on taking action that appears to be the solution but in actuality is not.

For example, one may conclude loss of pressure is due to your compressor capacity not being large enough for the task. But only after investing in and installing a newer, larger compressor, it is discovered that this does nothing to alleviate the pressure issues.

Full visibility of the system could identify the real culprit – a corroded pipe – without such expense and also indicate exactly where pressure starts to drop.

Of course, you could take pressure measurements manually with a pressure gauge but these readings only provide information for that one point in time.

Dealing to the problems caused by humidity

Excess moisture causes corrosion in pipes and damage to internal components impacting maintenance costs and raising the risk of downtime. It also causes problems in certain finishing applications and, in food and beverage applications, can breed harmful bacteria that spoils or contaminates ingredients or finished foods.

All the more reason to get clear on the impact humidity is having on your facility.

Measuring humidity in your plant allows you to take necessary action to mitigate its effects, reduce your costs and comply with any applicable health and safely regulations.

As already stated, a common causes of pressure loss are incorrectly sized piping or corroded piping which restricts air flow in the pipe. Undersized piping is often overlooked as what was appropriate and correct at time of installation is in many cases now too small to keep up with current demand.

Leaks can also cause your air system to run inefficiently, this can be caused by threaded connections during a less-than-careful installation. Over time a threaded connection will begin to separate, opening a space for air to pass through and escape.

Monitoring flow data acts as an early warning mechanism beyond visual inspection because the inside of pipes corrode without noticeable decay of the pipe exterior. Poor flow readings indicate corrosion, threading or pipe size issues long before they become critical.

Temperature monitoring as an overall indicator

Monitoring the temperature of various components in your compressed air system provides an indication their overall health. By comparing current component temperatures to the manufacturers documented optimal working temperatures, one can see if the system is being over-worked or under is performing.

With the above sensors installed, the last metric to monitor is power consumption – do this by installing a current sensor. Used in conjunction with the data from the flow sensors the overall health of the compressed air system can be determined.

And from this it is easy to calculate the cost per unit of your compressed air set-up. Increases in costs can reveal issues such as faulty controls, short cycling and unregulated spiking.

Compressed air is the lifeblood of many production facilities

Once the sensors and cloud monitoring is deployed, you finally achieve operational oversight of your system. With this comes insights on the idiosyncrasies and behavior of the system, component lifespan, real servicing requirements, usage profiles and whole lot more.

Compressed is air is vital to so many manufacturers, what are you doing to safeguard your supply?