EPAs List of Volatile Organic Compounds in order of toxicity 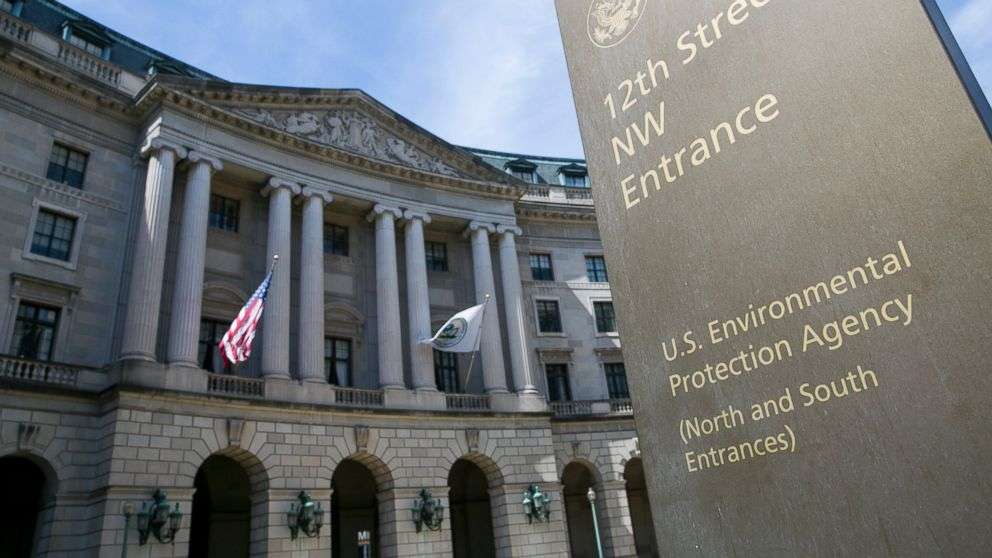 Volatile Organic Compounds are organic chemical compounds that negatively affect the environment and human health. They evaporate at normal room temperature and pressure and are present in both indoor and outdoor environments.

Outside VOCs tend to affect the natural environment (and indirectly wildlife and humans) e.g. Smog but inside, exposure to VOCs can drastically affect the health of humans.

Some VOCs are more volatile than others: those that evaporate faster are more dangerous and pose a greater risk. To provide clarity around VOCs and their risks the United States Environmental Protection Agency (EPA) adapted World Health Organization (WHO) guidelines to divide indoor organic pollutants into 3 classifications:

The three classifications are all important to indoor air and are all considered to fall within the broad definition of indoor volatile organic compounds. 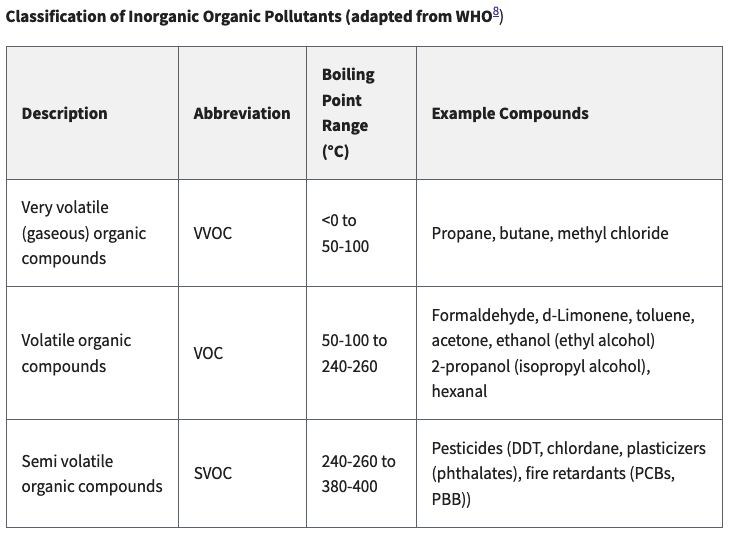 VVOCs are the most dangerous class of pollutants and can be toxic at very low concentrations. Examples include propane, butane and methyl chloride.

Propane is the most commonly used VVOC and is highly dangerous. Typically it is shipped as a liquefied gas under its vapour pressure and used for heating and cooking. Many households use portable propane heaters to warm garages and utility areas while propane gas grills are used for barbecuing.

Used in an almost identical fashion to propane, butane is contained in items including camping stoves, lighters, torches, fridges and freezers. Butane is regarded as one of the more harmful volatile substances to inhale.

Also known as Chloromethane, this is colorless, flammable, toxic gas that is widely used as a refrigerant but has many other industrial applications. Some examples include: as solvent in petroleum refining, a propellant in polystyrene foam production, a methylating and chlorinating agent in organic chemistry and as a herbicide. Exposure to methyl chloride causes a wide variety of issues from drowsiness and dizziness to seizures and comas depending on the level of concentration and duration of exposure.

Although less dangerous than VVOCs, VOCs are still hazardous to human health. Generally you are more likely to encounter VOCs as many are found in household products and VOCs may also be present in home or work environments. Exposure guidelines and thresholds for VOCs have been collated and published by the EPA. Below is a list of the most common VOCs.

This VOC is a known carcinogen. Formaldehyde is used to make resins for building materials, coatings for clothing fabrics, and paper. It commonly occurs in molded plastics, glues, lacquers, insulation materials and pressed wood products such as laminate flooring, plywood, fibreboard and particle board.

Used to make PVC plastics, piping, floor coverings and consumer goods, Vinyl Chloride is also known as chloroethene, chloroethylene and ethylene monochloride. The United States EPA IRIS program determined that vinyl chloride is “highly likely to be carcinogenic” and those residing close to factories that produce this chemical are at risk. The liver is the main toxicity target of vinyl chloride. Liver lesions and impaired liver function have been reported in workers exposed to low air levels over time.

EPA cites this VOC as “likely to be carcinogenic to humans”. Historically it was used as a dry-cleaning agent, a refrigerant and propellant for aerosol cans, and used in fire extinguishers and as a grain fumigant. Because of its harmful effects, these uses were banned and now Carbon Tetrachloride is only used in specific industrial applications.

An important chemical used as a gasoline additive and to make nylon, plastics, solvents, dyes, inks and paints. Paints in particular are under scrutiny as both commercial office and home remodeling involves exposing people to this VOC through paint fumes. Low VOC and toluene-free paints are available. In recent years several paint companies have been charged with misleading consumers over claims of VOC free paint products.

Used mainly as a commercial chemical solvent in consumer products and industrial processes, people’s exposure to acetone usually stems from use of paints, glues, nail polishes and particularly nail polish removers – either through home use or at consumer nail beauty bars. It also found in wallpaper and furniture polish.

Used in making cosmetics, skin and hair preparations, pharmaceuticals, perfumes, lacquer formulations, dye solutions, antifreezes, and soaps. However, the most likely exposure to Isopropyl alcohol is via its widespread use as a cleaner and disinfecting agent.

Hexaldehyde is used as a flavoring in food production and as a fragrance in perfumes. Additionally it is used to create other chemicals that are used in the production of plastics, rubbers and insecticides. People exposed to moderate concentrations of Hexanal for a short time can suffer irritation of the nose, throat, lungs, eyes and skin. Longer periods or higher exposure result in a choking feeling, coughing and rapid breathing.

Also called Carbon Bisulfide, this highly volatile compound is used in the manufacture of viscose rayon and cellophane. It is also present in varnishes, solvents and insecticides. The most common source of human toxicity is via inhalation in an occupational setting.

SVOCs tend to have a higher molecular weight and boiling point than VOCs meaning they are less likely to become a vapor at room temperature. However, this does not mean they are any less dangerous. The use of SVOCs in building materials, furnishings, electronics, and furniture is often proprietary – usually indicated by the term “additives” – therefore their presence and concentration is not required to be publicly disclosed. This represents a serious gap in information.

Organochlorine pesticides, one more widely known as DDT was used extensively from the 1940s to the 1960s in agriculture and mosquito control. As neurotoxicants they caused severe health and environmental problems which led to them being banned.

Listed as a “probably human carcinogen”, this SVOC was used as a contact insecticide for lawns and crops until it was discovered that Chlordane was very persistent in the environment, surviving in soils for more than 20 years. Between 1983 and 1998 its only approved used was to control termites, then in 1988 the EPA banned all uses of it.

Benzyl alcohol is used as a solvent, a preservative, and to make other chemicals. It is also used as a fragrance in perfumes and in flavoring, and is an ingredient in ointments and cosmetics. Also used in inks, as a photographic developer, and in dyeing nylon filament, textiles and sheet plastics.

A significant source of SVOCs are flame retardant chemicals such as those found in fire extinguishers. Polychlorinated biphenyls (PCBs or PBBs) are the most common of these.

Take control of the air you breathe

VOCs are ubiquitous in indoor air, the questions are: what concentration levels are in the air you breathe? and how long are you exposed to them? Using sensors to sample indoor air quality and measure VOC concentrations is the only way to know for sure.